Knackered after a busy Saturday and suffering the first really autumnal day of the year, a few drams seemed the ideal source of comforting.

Rosebank 21yo 1990/2011 (53.8%, OB, 5886b): nose: vanilla, custard, then some wood. The dominant note, however, is definitely varnish or nail polish. Also a very distant mixture of mineral and vegetal fragrance -- moss on a rock it is, then. Subtle, though. Clean laundry and honey later emerge. Herbs and rocks again in the narrow palate. Finish: a metallic flash, then wood shavings. Maybe a pencil sharpener blade (come on! we have all licked it as kids, just to see!), then pencil shavings. Not much else is left after a long oxidation. This is not the most agreeable or impressive Rosebank, it is quite steeply priced, yet it remains very nice. 8/10

Amrut Portonova (62.1%, OB): nose: bakery, sweet wines, corn syrup, then alcohol after a bit. Mostly bakery all the same (pâte à choux, caramel, cinnamon). Also some wood and varnish. Thirty minutes in, vanilla and custard kick in. Mouth: fortified wine, caramel, cough syrup, Grand Marnier, cloves and pepper. Finish: cough syrup all the way, meaning liqueur-like with a slight bitterness. Then, a bit of faint mocha (bitter and dry), morphing into cocoa powder, ground cloves, ginger bread with a peppery feel, ground black cardamom. A well-balanced sherry, this. I have always thought Indians were masters in the kitchen; it seems their expertise now includes the cellar too. 8/10

128.3 5yo 2006 Chestnut puree and new hiking boots (61.3%, SMWS Society Cask, ex-Bourbon Barrel, 229b): nose: bubblegum, all sorts of sweets (not a connoisseur, so no enumeration!), some medicine (nose spray?), bandages, wood varnish. Mouth: smooth and mellow. Finish: round and full of vanilla, followed by milk chocolate, nutmeg and a touch of ground cardamom too. Oxidation has transformed this one dramatically. The hiking boots are but a hazy memory, the clogged sink has disappeared completely. I first thought I had poured some Tyrconnell -- it has become that delicate. 7/10

Still sore, still raining, but happy times all the same.

(Thanks to Colin and JS for the Rosebank, to Fixou for the Amrut sample and to FN for the Penderyn)
Posted by the Old Man of Huy at 10:05 No comments:

Another autumn-related tasting, which, one has to admit, is quite topical in mid-September. A heavy one on a Saturday evening, as people were busy on Sunday. P could not make it (holiday) while JD was suffering from food poisoning after a trip to the promised land.

The menu:
Glenmorangie Cellar 13 2nd Edition (43%, OB) (brought by Psycho): fits the theme, because it reminds Psycho of Maschinenfest, which takes place in autumn. For the record, a bottle of the first edition was downed the first time kruuk2 attended the festival with me. Nose: custard, flowers, a florist's stall (SauronTNT), very distant wood, raw potato (sonicvince). Mouth: custard, vanilla, slightly woody and very seducing. Finish: butter (?), bakery, more custard. This one is always a pleasure to drink.

Listening to Thomas P. Heckmann - The Lost Tales Vol. I

Whisky Ecossais IML Blend (40%, Saile & Sabga Connoisseur Exquis) (brought by kruuk2): fits the theme, as the packaging is hardly thicker than a leaf -- it comes in a plastic bag. Nose: a bit of peat, sulphur, not very appealing. Mouth: sweetish with some ash, not too bad. Finish: caramel, apple, pear? This one is surprising: we all expected it to be disgusting (it comes out of a satchet!) , but it is not so bad after all, though the nose is not all that. 5/10

Laphroaig 40yo 1960/2001 (42.4%, OB, 2400b) (brought by me): in theme, since it is golden as autumn leaves and tastes of light peat/earth. Besides, one of us turned the same age last month. Nose: light peat, citrus, lots of fruit (red, white, citrus), dried fruit and bacon (Psycho), bosc pear (adc), custard (sonicvince); this is so rich and complex it hurts. It is well subtle, though. Teenagers in search of extreme feelings, piss off! Mouth: smooth and velvety, honeyed (ruckus) and, well, to cry for. Finish: long, with grain (in a forty year-old!?), cold ash (SauronTNT). I was completely paranoid this had collapsed (it was not too impressive the last couple of times I had it), but it has not. Still the king of drams. 10/10

Penderyn Peated (46%, OB, b. ca 2012) (brought by adc): in theme, as it is peaty, which reminds us of autumn. Nose: hint of rubber, baked apple (sonicvince), ginger bread (Psycho), Stollen, nail varnish. Mouth: not too expressive, really. Finish: hiking boots after a hike, clogged sink, in line with 128.3 tasted earlier this year. Psycho, 'Penderyn are planning a Mezcal finish, which they will call Pendejo.' This one had the worst position in the line-up (right after a legendary dram), yet did not seem ridiculous or out of place. We allowed some time for the Laphroaig to vanish from the taste buds, got some food in and so on, after which this one went down a treat. 7/10

Gentleman Jack (40%, OB) (brought by kruuk2): we stop trying to justify the appearance in the line-up, since everyone starts using the lame golden-leaf excuse. Nose: wood, vanilla, marzipan -- predictable and great, just like a good grain. Mouth: velvet, more marzipan. Finish: mint bubblegum (Psycho), overripe banana sponge cake. This seems better than when we tasted it at the Pacific War tasting a while ago (not on blog yet): it sticks out more.

Dailuaine 23yo 1988/2012 (43%, Iain Mackillop Mackillop's Choice, C#3549) (brought by SauronTNT): this one was distilled in June and bought during the summer, so off-theme. Bah, good enough. Nose: candlewax (kruuk2), wet hay, wet papaya, melon (SauronTNT), lemon, citrus with a whiff of cured ham. Mouth: slightly stringent, lemony again. Finish: lemon and hay. A good dram that does not change my perception of this overlooked distillery. Comparisons with my own bottle start to fuse, so I pour it to those who have not tried it:

Psycho leaves, at this point.

Balblair 1989 3rd release (46%, OB, ex-Bourbon Barrels) (brought by sonicvince): nose: rainy evening in front of the fire place (adc's poetry machine is in full motion), light and subtle. Mouth: coating, though dryish. Finish: nice and floral, with a slightly stringent note and an impression of lichen. Glad to finally get to try a recent Balblair, and looking forward to have it with kruuk2's own 1989. 8/10

SauronTNT leave us at this point.

Old Pulteney 21yo 1990/2012 (56.7%, Cadenhead Authentic Collection, Bourbon Barrel) (brought by dom666): nose: wider than the official bottling, with green hazelnut and vanilla. Mouth: very peppery, Cayenne pepper, even. Finish: more pepper, nutmeg and some toffee. Mixed feelings on the results: sonicvince and kruuk2 prefer the OB, ruckus is undecided, JS and I prefer the Cadenhead.

Ardmore 19yo 1978/1998 (46%, Cadenhead Original Collection) (brought by me): strange that we never had a Cadenhead bottling at a tasting with this group, and we have two back to back, this time. Nose: quite discrete; maybe some very distant smoke. It is a bit overshadowed by the Pulteney, probably. Mouth: smooth and gentle, with distant smoke again. Finish: there is a tiny touch of peat in there, but it is mostly malt and custard. A bit underwhelming. 7/10

Ardmore 13yo Rhum Clement Wood Finish (44%, F&O, 4b) (bottled and brought by kruuk2): nose: much, much more assertive, reeks of rum with a whiff of peat smoke in the back. Mouth: slightly drying, bonded warehouse, some dark cherry and a hint of smoke again. Finish: lots of rum, cough syrup, medicine, perhaps marmalade. 7/10

Talisker 1996/2008 Double Matured (45.8%, OB Distillers Edition, Amoroso Sherry Finish) (brought by ruckus): nose: quite neutral, at this point. Mouth: some sting, mocha, caramel. Let us face it: we are not able to comment on this one, right now. Finish: coffee. Coincidentally, everyone forgets about the hot coffee in the kitchen. This one comes too late in the line-up, but even then, it seems underwhelming.

Ardbeg 12yo 1999/2012 Galileo (49%, OB, Marsala Finish) (brought by SauronTNT): we poured this one a while ago, since SauronTNT left early. It has had a lot of time to breathe. Nose: cold barbecue, ash, coal, plum (SauronTNT), burnt prunes. Mouth: teriyaki sauce, smoked meat, pastrami. Finish: ash, burnt meat, a bit of cereal. Meh. Another marketing ploy.

Drams of the day (Laphroaig 40 is not in the competition for obvious reasons):
kruuk2: Dailuaine 27
JS: Old Pulteney 21 Cadenhead
sonicvince and myself: Tomatin Decades
adc: Dailuaine 1988
dom666: Gentleman Jack
ruckus, SauronTNT and Psycho could not tell.

Epic tasting. We had to skip the Bowmore Tempest Batch 3 that ruckus brought, as we were not going to enjoy it. Lovely company, good drams altogether (including some interesting experiences), nice food, fantastic music (to my taste, at least) and cheerful atmosphere. It all ended around 3:30 AM, which tells a lot. 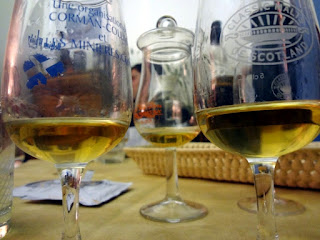 'lympics are over, paralympics have taken over, friends are in town and they are back from a trip to Islay. Needless to say they have to experience proper whisky, now. :-)
Seeing as the first Friday of the month is the 7th, the outturn is not out yet. All the same, the bottles are there and can be tasted.

37.52 9yo 2002 Bottled Essence Of Gardens And Orchards (58.9%, SMWS Society Cask, Refill ex-Bourbon Hogshead, 286b) (JS): nose: too young! Solvents, pills cabinet, vague fruit (peach?), butter (JP). Opens up in the long run to become quite animal. Is this a Clynelish? Mouth: vanilla and peppery custard. Cream, taffy (JP). Finish: nutmeg, pepper, a hint of chilli; good but simple. This is a lot better than the nose suggests, but not all that.

7.76 22yo 1990/2012 A Broad Canvas Of Fruity Colours (56%, SMWS Society Cask, Refill ex-Bourbon Barrel, 216b) (myself): nose: lots of custard, pineapple, peach and melon. Then vanilla takes over. Mouth: banana cake, pudding, custard; this is quite peppery too. Finish: more banana spunge cake, peppered melon and vanilla custard. This is excellent indeed!

G1.8 21yo 1990 A Bag Of Assorted Boiled Sweets (62.9%, SMWS Society Cask, Refill ex-Bourbon Hogshead, 211b) (JP): JP wants something different rather than another manly and peaty malt from Islay. Ever had grain? This one, then! Nose: vanilla and marzipan. Mouth: nutmeg-sprinkled milk. Finish: long and peppery, with some coconut (JP). Another great grain.

127.29 10yo 2001 Separates The Men From The Boys (63.8%, SMWS Society Cask, Refill ex-Sherry Butt, 73b) (me): first sherry-cask Port Charlotte bottled by the Society: cannot not to try it. Nose: smoked animal skin. Sherry pops its head out after a bit of airing. Mouth: fiery pepper, soft leather bags. Finish: leathery (I guess it is the sherry influence), animal (musk). Interesting. Not the best thing I have tried, though. I am reasonably convinced Fixou will go mad for it.

Excellent, relaxed time. Few customers, as usually on a Saturday, lots of socialising with the others and the staff. It was most interesting to introduce JP to this world: as a home-brewer, he is well versed in the art of transforming grain into booze, so was able to shed light on this and that on top of coming up with original tasting notes. Great to see JP & EP after five years.
Posted by the Old Man of Huy at 10:26 No comments: