It is the Queen's official birthday, today. JS set the theme accordingly. "Royal-birthday drams" is a bit of a constraint, though, so she kindly extended it to be any anniversary whiskies, in whichever way.

The suspects: MR, OB, cavalier66, jazzpianofingers, JS and myself. 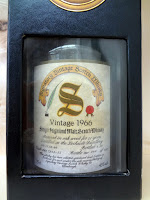 35.59 39yo 1971/2011 Arabian Nights (40.9%, SMWS Society Single Cask, Refill ex-Bourbon Hogshead, 74b) (me): we had this one last year and OB regretted it was late in the line-up, leaving the measly ABV to suffer from the sequence. He is therefore delighted we have it again. Oh! and it fits the theme in that it is the same age as one of the guests. Nose: dunnage warehouse aplenty; this has moss, fruit, old wood and damp staves oozing from every pore. Honeysuckle, rose petals, then soft mandarin peels, melon skin and a hint of mint. Lovely. Mouth: it tickles the tongue, though mandarins swiftly come up. This is soft and balanced. Finish: comforting, creamy, with a mix of melon and mandarin. It feels like marzipan in the making. Wow! Fruitier than ever. 9/10


jazzpianofingers: "You spot the virgin oak easily. And I get really bored really quickly -- 'Och! Virgin!"

The soundtrack:
Urawa - The Most Boring Thousand Years Of My Life

Irish Whiskey 24yo 1991/2015 (46.7%, Whisky-Fässle 10th Anniversary) (OB): this was released for this bottler's 10th anniversary, obviously. Nose: a tin of mango and maracuja with a whiff of shoe polish. Green banana, say the others. I get horse saddle and pastry. Mouth: black pepper off the mill, sprinkled onto tropical fruits. Finish: wow. Hot and super fruity, with mango and maracuja, and even a touch of clogged sink. Beautiful drop that takes water very well too. 9/10 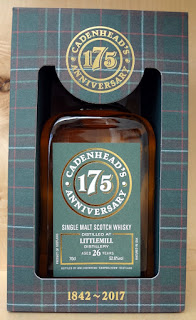 Littlemill 26yo 1990/2017 (52.6%, Cadenhead 175th Anniversary, Bourbon Barrel, 180b) (OB): this one came out only a couple of weeks ago. OB thought this was the ideal occasion to open it -- he was probably right, too! Nose: floral and fruity, ever-shifting. Buttery mango, hints of grass, Aspirin, say the boys. Obviously hungover. Mouth: fruity and herbaceous, with papaya, oregano, perhaps a faintly metallic edge. Great balance. Finish: it has buttery mango again and pastry, the finish is slightly herbaceous too. This is mango turnovers with a pinch of herbs (sage and oregano). 9/10

Balvenie-Glenlivet 12yo 1979/1992 (59.5%, Cadenhead Authentic Collection 150th Anniversary) (JS): datz right, this is from Cadenhead's previous milestone anniversary, bottled a quarter of a century ago. I believe it is also the first independently-bottled Balvenie that I try, which is not ashamed of its name -- several have been bottled more recently under the name Burnside, though they are teaspooned. Nose: brine, vinegar, whelk (OB). A slow-cooked Marmite sauce, with that distinct smell of malt vinegar. Salt, cockles. Water gives it an over-baked-pastry feel, with added honeysuckle. Mouth: soft and silky, yet the ABV quickly catches up. It becomes rather salty and numbs the palate a bit. Yellow flowers and green chilli. Finish: huge and a bit metallic, with sage, salty mussel shells and green chilli, sprinkled on green hazelnut paste. Unripe apricot comes up, late in the game. Very interesting dram, if a bit cerebral. In fact, I find it close in style to an RMS. 8/10

The Living Cask 11yo b.2017 (56%, SMWS, 1st Fill ex-Oloroso Cask, Finished in a Quarter Cask, C#1) (MR): this was bottled to celebrate the opening of the SMWS's second London venue, the Kaleidoscope Bar, in Devonshire Square. It might be a distillery near Carron that is not Imperial. It is not Scotch, however, since it was matured and bottled in England. Nose: very flowery, with Turkish delights. Not much else, but what it does, it does very well. Mouth: similar to the nose, with Turkish delights, a growing spiciness and a milky texture. A note of verbena perhaps? Finish: oak-y notes (vanilla and coconut), with also flowers (honeysuckle), acacia honey and soft cake. Yum! 8/10

We talk about Auchentoshan Three Wood.
cavalier66: "It's a bit like razor blades, isn't it? First, you had one blade, then two, then three..."
tOMoH: "I hope someone does the same as with razor blades: 'This is a 26-cask-matured whisky. By the way: fuck you.'"

We move outside, since the weather is so nice and the sun a little less aggressive.

Strathclyde 36yo 1977/2013 (58.1%, Hunter Laing The Sovereign, Sherry Cask, C#HL9912) (jazzpianofingers): the Queen is obviously the sovereign, but she also celebrated her silver jubilee in 1977, when this was distilled. Double connection to the theme, which deserves a round of applause. Nose: raising bread dough, caramel-making, blackberry pancakes. Mouth: fresh, sweet, silky, with black pepper for good balance. Dark cherries, ripe and juicy. Finish: dark cherries from a tin -- it has a metallic edge to it. Greek wine, perhaps. A great old grain that has a gentle dusty mouthfeel. 8/10

Laphroaig 32yo b.2015 (46.6%, OB, ex-Oloroso Sherry Hogsheads, 21835, 5880b) (cavalier66): this was bottled for the 200th anniversary of the distillery. I am very intrigued. The notes I have read so far let me think it would not be my thing, so it is nice to get to try this without taking the (expensive) risk of buying a full bottle myself. Nose: fizzy, with Cherry Coke and a very faint whiff of burnt wood, far, far away. Jack fruit, says cavalier66. Mouth: waow! The fruit on this! Blueberries, then notes of more tropical fruits, such as maracuja (cavalier66), papaya, tutti frutti (oh! rutti). Finish: dark fruit and gentle smoke. The fruitiness becomes more tropical again, after a few seconds. This is beautiful indeed, if not quite the same level as the 1960 and 1974 expressions. 9/10


The time has come to observe that life does not suck, right now.

tOMoH: "What is the difference between herbal and herbaceous?"
jazzpianofingers: "Well, herbaceous is the plant -- this is herbaceous. Herbal is... the thing."
cavalier66: "Thanks for explaining that distinction."

OB and MR take a leave. I try to convince them it is not a good idea, but they insist. Their loss.

cavalier66: "Is there a sense of younger and older whisky, in here?"
tOMoH: "I don't know, but I can definitely smell the re-racking."

The soundtrack:
U 96 - Replugged

That is the end of today's selection. It has been very, very good. All the same, I cannot let those good people leave without a final dram. Tough luck for OB and MR, we will have something that I hope is special enough. I pour it blind. 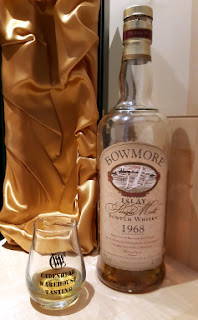 Bowmore 32yo 1968/2001 (45.5%, OB for the 50th Anniversary of the Stanley P. Morrison Company, 1860b) (me): yup, it is even an anniversary bottling. Nose: "it smells like my dad," says jazzpianofingers. "Lovely fruity nose," says cavalier66. I can feel "Bowmore eyes" coming up (© DH). Squashed strawberries. This nose! I could spend hours, here. Pink-grapefruit-scented soap, pink pepper shavings. "Blimey," says jazzpianofingers. Shamone! Mouth: "Please don't say it tastes like your dad, too!" (JS to jazzpianofingers) Acidic, with pink grapefruit, a touch of smoke, say my fellow tasters. The balance is purr-fect, fruity as fook and simply spectacular. Finish: mango nectar and pink grapefruit goodness, with distant memories of a coal stove in another room. Meow. This is good. Velvety, mellow and dangerously easy to drink, if one were to not give it enough time. It seems a little less exuberant than the previous couple of times, but remains an incredible dram. 10/10

cavalier66: "You're a fortune-teller, aren't you? No, you're a pianist, which is the closest thing."

Strange, how the line-up was unintentionally divided by supplier. All mine in a row, all OB's in a row, all cavalier66's in a row, each punctuated by the one-bottle offering of the others. In any case, great selection and good vibe. Very pleasant to use the terrace too.
Posted by the Old Man of Huy at 22:13