It is full of anticipation that we are lead to the room in which our first masterclass of the weekend takes place. The line-up has not been disclosed, but the one piece of information that was disclosed was so huge that the tickets sold out in one minute. One minute. The organisers did release a second batch of five tickets or so last week, presumably no-shows, but at 13:00:00 on the very day, both JS and myself were waiting and only she managed to get in. My browser read, 'sold out' as soon as the clock indicated 13:01.
The piece of information in question? There were going to be four drams from Gordon & MacPhail's vast collection of casks, all bottled in 2014 and distilled... in the 1950s.

Full of anticipation we are, then, and also quite annoyed that we can only enter the room ten minutes after the scheduled start of this session. We end up starting twenty minutes late, which is worrying, as I am sure each dram could easily command two hours of attention. Ah, well.
While waiting, we meet some of our co-tasters for the session. I will realise tomorrow that they are Whisky Sponge and his gang. We will see them again.

The whole Urquhart dynasty is there (well, the living members, at least), and each has a piece to introduce their respective bottle. The whole thing is but an excuse to celebrate retiring managing director, Michael Urquhart, who does the introduction with the first, warm-up dram. Johnny McCormick, who wrote the book that comes with each of the recent old-age bottlings, takes part too.

JS notices as it starts that her Dram #3 is in a broken glass and leaking. It is swiftly replaced, fortunately, but what a waste! :(

MacPhail's 15yo (40%, Gordon & MacPhail): nose: dunnage warehouse, toffee, lemon. Mouth: lemony goodness, light toffee. This is easy and, dare I say, a bit bland. Finish: great finish, with milk chocolate, toffee and ginger bread. It works as an introduction, and to remind everyone that GMP makes whiskies for everyone, not only the elite. 6/10

We shift gears in a dramatic turn of events. 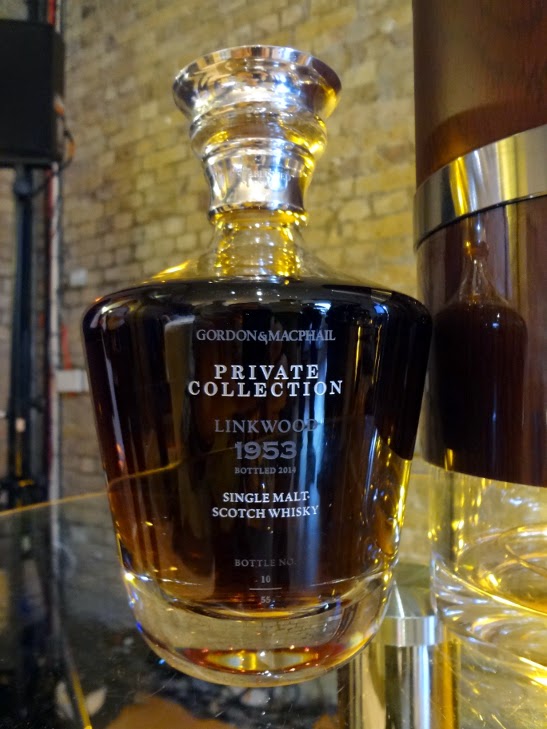 Linkwood 61yo 1953/2014 (49.4%, Gordon & MacPhail Private Collection, First-fill Sherry Hogshead, C#279, 55b): that is correct: 55 bottles. This is the oldest Linkwood GMP had in their warehouse and also the oldest Linkwood ever bottled. Nose: !!!!!!!!!!!!!!!! Such a depth I die a little! Dusty bookshelves in a museum, age-old, leather-bound books, raisins, prunes, dried figs, dried dates, wood (well under control) -- this is moving to the highest point. Mouth: saddles, leather boots, but make no mistake: the balance is absolutely harmonious. Never does it become too sherried or too oaky. Raisins, Chesterfield sofas, peppered oil. Here too, the elegance is majestic. Finish: nuts, husk, walnut stain, a slight dryness, roasted pine nuts. This is coating and everlasting, giving out more raisins, prunes and dates. I have to admit becoming really emotional with this one. But then the whole room is lost in contemplation. So much so that I cannot remember much of Stephen Rankin's presentation and the loving anecdotes about his mother. 11/10 (it is not a typo, this is my favourite) 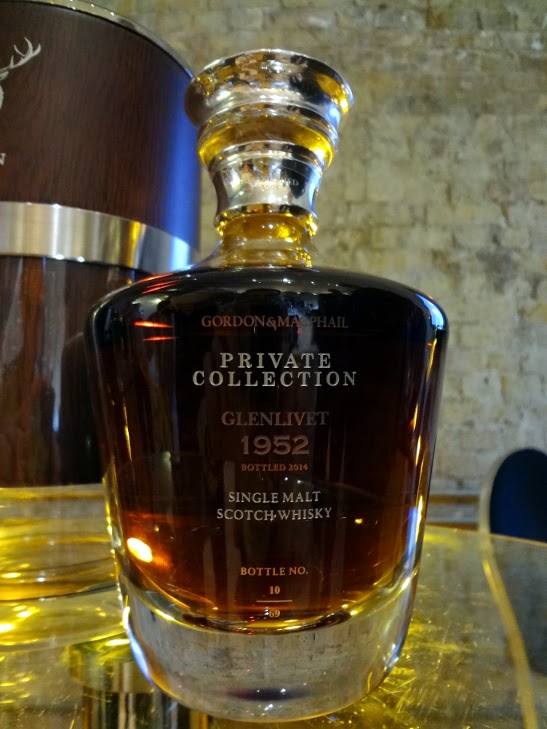 Glenlivet 62yo 1952/2014 (43.4%, Gordon & MacPhail Private Collection, First-fill Sherry Butt transferred into Sherry Hogshead in 1969, C#69133, 69b): the second oldest Glenlivet ever bottled, only topped by the seventy-year-old that was released a few years ago, also by GMP. Nose: raisin-infused floor wax, furniture polish, not just any furniture polish: the encaustic they use to polish the dashboard of a 1952 Jaguar XK-120 (British Racing Green, obviously). Some fresher notes then emerge: baked apples, cut pears, and even a whiff of tropical fruit -- unexpected, at this age. This is ridiculous again. Mouth: über-fresh, with a hint of milky coffee in the background (it is a sherry maturation, after all). This one dances on the tongue, giving notes of dark grapes and apricot juice. Finish: ever-evolving, going from wood to fruit and back again. It lasts forever as well, keeping one on their toes for the next flavour to appear. This is JS's favourite of the lot -- finally a good Glenlivet! 10/10 Mortlach 63yo 1951/2014 (42.5%, Gordon & MacPhail Private Collection, Sherry Hogshead, C#704, 61b): nose: bonkers, once more. Wax, brine, pickles are constantly evolving in a great gig. Mouth: what to say without repeating the same again? The harmony is humbling, to be honest. Brine and shoe polish, never overboard either way. Milky nuts are thrown into the mix at a late stage. Finish: short, or so it seems. It comes back in a cavalcade of smoke, dried, dark fruit, brine and huge gherkins (NYC style). This is the weakest, so far, but still easily deserves 9/10 (being harsh). 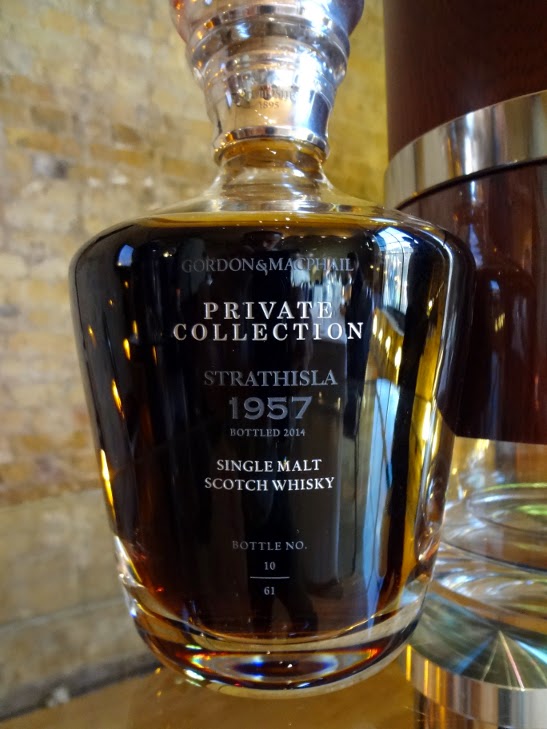 Strathisla 57yo 1957/2014 (51.6%, Gordon & MacPhail Private Collection, Sherry Hogshead, C#1730, 61b): nose: ginger bread, dunnage warehouse, cola, stewed prunes that have been left to cool off, tropical wood (teak, mahogany, hevea brasiliensis, ebony, even). There are many more scents in there, but unfortunately, time is running out (as it tends to do when one starts late...) Mouth: tons of stewed prunes again, dark grape juice, glühwein, plum syrup from a tin of plums -- that would be tinned-plum syrup, probably. Finish: ash, burnt wood, burnt rubber, burnt sienna (for the model-aircraft builders who read this), smoke. To tell the truth, this is too much. Great dram, spoilt by the overly woody finish. Still a decent score, mind. 9/10

I had bet it would be those distilleries or Glen Grant, seeing as GMP seem to have unfathomable stocks of those five, and have had for centuries. Small victory for the Old Man of Huy, then.

Regarding the drams, this is the end of whisky. We have just had 258 years worth of whisky in five drams, the first of which being fifteen years old. I cannot think of anything to follow this without seeming out of place. Good thing, though, as it gives us the break we need to grab a bite.

About the masterclass as a whole, what a disappointment to start late and spend almost twenty minutes on the fifteen-year-old to then have to rush through the four kingly ones. It was so tight I had to stop paying attention to the presentations to focus on enjoying the drams and trying to understand what I was sipping -- not an easy task, since none of them was an easy dram.

The presentation was perhaps a bit formal and ex cathedra, rather than the more interactive approach we are getting used to. I suppose the occasion was solemn enough to justify it.

Still, it was an honour to have the chance to take part in the experience. However, if I understand the limitations of this sort of celebrations (it has to abide by a timetable), some Teutonic rigour around said timetable would have been a benefit to all.

Carry on reading here.
Posted by the Old Man of Huy at 11:50