Hard to believe the last one was a year ago, but so it is. The Whisky Show is here again and promises to be bigger than ever. If the queues are anything to judge by, they kept their promises: we reach there 30 minutes late and still have to queue for 45 before we can get in. And it is raining. Ah, well. Check-in seems efficient enough, not sure why it takes so much time, other than there being many, MANY people. The queue outside is twice as long as last year's, at least. And people keep pouring in. I quickly fear hell inside, with hardly enough space to move from stall to stall.
Breathe in, breathe out, relax, wait and see. Despite the rain and wait, JS, dom666 and I are excited.

In we go and Berrys' stall is the first we cross paths with. Forget the idea of detailed notes, they are pointless, here. This is a collection of impressions in a festival environment.

MJ and Mrs. J catch up with us. We swap recommendations (it's a bit early for that, innit), yet they decide to fly solo, rather than tag along. Fools.

BBr do not have the promised Littlemill, which means we go (dom666 tries the Bunnahabhain 1987 I had earlier this week, though).
Next stall is Gordon & MacPhail, where the guy recognises us all -- a pleasant touch.

PS finds us with his big camera.

We move on to Signatory Vintage's.

Glencraig 38yo 1976/2014 (44.3%, Signatory Vintage Cask Strength Collection, Bourbon Barrel, C#4254, 188b): nose: mirabelle-plum compote, honey, juicy peach. Mouth: silky and soft, milky, even. Finish: fruit jelly (quince, I reckon), coconut yoghurt, vanilla pudding. Thunderstruck, I am. This will remain the dram of the show for me, outside the masterclasses. 9/10

Longmorn 22yo 1992/2014 (51.4%, Signatory Vintage for The Whisky Exhange, Hogshead, C#48488, 224b): nose: the typical Longmornian orange marmalade. Mouth: orange peel and the related acidity/bitterness. Finish: some pepper, alongside the orange deluge. This one is a bit one-dimensional, yet very pleasant. 8/10 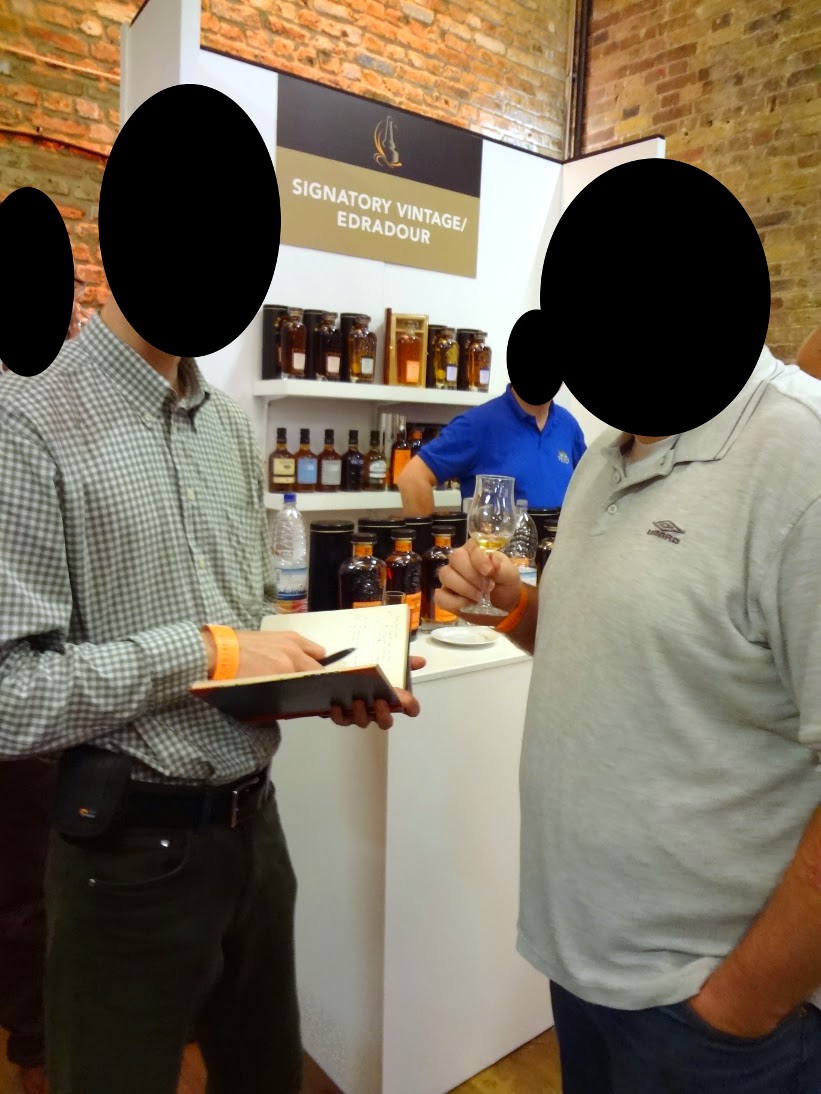 A quick walk across the room to greet the staff at the Teeling stand. SMcD is still there -- he will not take on his new responsibilities at SMWS before Tuesday, which means this is his last gig -- and what a way to go! We are treated to a yet-to-be-released NAS bottling from under the counter.

Another trip across the hall to Hunter Laing's. We bump into GR from Whyte & MacKay and the Whisky Cyclist on the way. The latter is sporting the same hat as SMcD, which amuses us greatly.

We struggle a little to find the Speciality Drinks stall: it is in a separate room, where we discover many more stalls, many of which we will never even visit, due to lack of time. No wonder there is still room to move around, despite the record attendance. It is extremely spread out, this year.
In the many occupied rooms (half a dozen, at least), aside the various whisky and food-pairing stands, they have reproduced every step of the whisky-making process, including floor-malting and distillation. Fascinating, if you have never seen it before. We have seen it before and we are here to try whiskies, however. I fear a lot of people have the same mindset and the educational programme might not touch enough people to justify the hassle of putting it up.

At SD, the promised Teaninich is not available. As mentioned (complained) last year, it seems pointless to give the dram list (at the eleventh hour), if it is not accurate.

Glen Spey 25yo 1988/2014 (49.1%, Speciality Drinks The Single Malts of Scotland, Hogshead, C#356077, 192b): this comes recommended by the staff. Nose: thyme on a campfire, vanilla pudding. Mouth: thyme-infused vanilla pudding, pepper. This is quite delicate. Finish: tingling and pleasant and, again, full of thyme infusion. 7/10

Benriach 24yo 1990/2014 (50.2%, Speciality Drinks The Single Malts of Scotland, Bourbon Barrel, C#100142, 315b): nose: mostly dried herbs. A bit boring, I am afraid. Mouth: not noteworthy. Watery, with a dash of pepper. Nothing wrong with it, simply bland. Finish: finally some action. Spicy pudding, apple crumble with some spices (cinnamon, ginger, ground cardamom). 6/10

I spot something unusual.

Ben Nevis 43yo 1970/2014 (44.5%, Speciality Drinks): funny that there has never been an indie Ben Nevis at any show we went to, and there are two this year, while the Ben Nevis guys do not even have a stall. Of course, this one is special. I HAVE to try it. Nose: verbena and gunmetal, at first, then fruit comes forward. Mouth: odd, now! Daiquiri with herbs, milk and pears gone off. Finish: fruity and herbaceous (bergamot), though it feels watery. Good whisky, yet I fear I am lured in by the single blend label. Objectively speaking (if at all possible), this is too expensive for what it is. It is more interesting than good, and the comparison with the previous single blend that TWE released is unavoidable. That one pisses all over this newer Ben Nevis and was cheaper by a considerable amount. No buyage, then. I still give it 8/10. I am like that.

Time to gather up for the first masterclass, which appears here.
Posted by the Old Man of Huy at 15:39