We are on time, today. Our new Swiss friends are here too and take the same seats as yesterday. One of their mates flew in just for this masterclass -- no, wait! We discover later on he flew in only for the last dram of his masterclass, since all the others are in his collection. Dedication, or what?

There was a Brora masterclass at Whisky Live! Paris last week. That one was presented by Serge Valentin of whiskyfun.com and Charles MacLean, who everyone should know (if you do not, watch The Angel's Share, at least). Four drams were presented there:

Impressive line-up, yet it might pale in comparison with this one. We hope so, at least. :-)


We start no more than one minute late, which is a welcome change. Six drams to go through, today, all laid out in a triangle in front of us. Colin Dunn, Global Pusherman for Diageo, rock star extraordinaire and our master of ceremony today, does not do things like everyone else, so we will make our progression at random. And very quickly, which means not much time for tasting notes.

Brora 25yo (56.3%, OB, b.2008, 3000b, 7th Release): nose: earthy and muddy at first nosing, it then evolves towards waxier notes (of course). After a while, and even more so coming back to it after having tried the others, it becomes a candle haven. Mouth: tamed wax and mud. It is drying and fiery like a dying campfire -- embers and ashes, not flames. Finish: lots of wax, hot candles, pepper and even a hint of liquorice (says Colin). dom666, a self-professed Brora sceptic, likes this one a lot. It will remain his favourite of the lot. JS is surprised to like it -- she had preconceived ideas, based on the reputation of the distillery. Me? Well, I thought it was too expensive when it came out at 180£. I would not mind having a bottle, now. 8/10

Colin Dunn, 'Earlier, I had a whisky called Karuizawa. Have you heard of it?'

Brora 22yo 1972/1995 (58.7%, OB Rare Malts Selection): Colin cleverly (sort of) cuts the crap and the hype by slapping the legend in the face immediately. Instead of building up to dram #5, we try it now. Nose: a Broraz-de-marée, this (tough luck if you do not read French). The farmyard assaults reach a ridiculous level. Manure, freshly-ploughed fields, cow dung. Being a countryside boy, this is music to my nose, fragrance to my eyes and silk to my ears -- no, wait! Well, it smells bloody good is what it is. Mouth: imagine Wagner -- it starts softly and builds up to impressive intensities. Ashy, muddy, drying. This one has notes of candle wick and tractor tyres. No wonder JS is not a fan. Finish: muddy and earthy again, before it dies down with wax. This is an ode to the peasants of all countries who used to cultivate the land by hand and come back to a candlelit home in the evening. Beautiful. Is it 3500£ beautiful? Not a chance. For that price (what it goes for at the time of writing) and that reputation, I expected even better. I am hard to please that way. 9/10

Colin Dunn, 'I think there are many Scandinavians in the room; am I right? Raise your hand if you are Scandinavian.'
And it feels like the Viking invasions again (around 60% of the audience).

Brora 30yo (54.3%, OB, b.2010, 3000b, 9th Release): nose: this plays in a different register. Lots of fruit and lavender soap, alongside the more traditional wax. I detect a faint note of tractor wheels, yet nowhere near what the RMS is displaying. Mouth: perfect balance of wax, peat, earth, mud and cooling ashes. Finish: gone is the earthy character, in come waxy fruits (peach, apricot, greengages).  Lovely. 9/10

We talk about the prices of these bottlings, auctions and speculation. Johnny McCormick (see yesterday's masterclass), who is in the audience today, gives too many tips on what to look for at auctions. I reckon the competition is fierce enough as it is, Johnny!

Brora 32yo (54.7%. OB, b.2011, 1500b, 10th Release): I attempted to try this one a couple of years ago, but could not: it was empty. Nose: ash, embers, a healthy dose of fruit, wax seals, dunnage warehouse. This is noble and elegant. Mouth: round, milky and fruity; fruity gummy bears it is. Finish: I am surprised to find this so extremely warming, even now. It gives me the same sensation as my first ever dram: liquid going down, fire coming back up. Interesting. 8/10

Colin starts a debate about mixers and explains how he hooked an audience on Islay to Lagavulin-and-Coke, adding that, 'most would prefer Lagavulin acoustic.' He dances the Hokey Cokey while doing so, which cracks us up immensely.

Brora 1978/2014 (49.3%, OB, 2b, Sample only): not sure if this is the same cask sample as the one in Paris. The bottling date, the 30th September, suggests it is not. Nose: smoke and kumquat. I do not take any more notes for the nose -- is it the fever of the moment, or the lack of things to note? We will never know. Mouth: milky fire (fiery milk?), coconut milk sprinkled with lemon juice. Although hot, this is silky and very pleasant. Finish: hot and fiery again, with notes of burning wool and roasting sheep (the Karuizawa speculators burning in the Fires of Orc, surely). This is very good, yet, as with Ardbeg, I firmly believe the master blender sublimates those old casks by marrying them together. This, as a single cask, is less complex and rewarding than the "lowly" vatting of several casks such as the other five expressions. 8/10

Colin -If this is released as a single cask, it will sell for 10000£.
PS -What does it say on the label?
Colin -It says,'no commercial value.'
House. Down. Brought.

Brora 35yo (48.1%, OB, b.2012, 1566b, 11th Release): this one I did try last year. Nose: farmyard galore, manure that promptly disappears behind wax, candles and fruity soap or shower gel. Mouth: round, waxy, bursting with encaustic and furniture polish. Finish: Why am I wasting my time taking notes, here? This is great. 9/10

Back to dram #5 (see above) to finish in a bang after all. 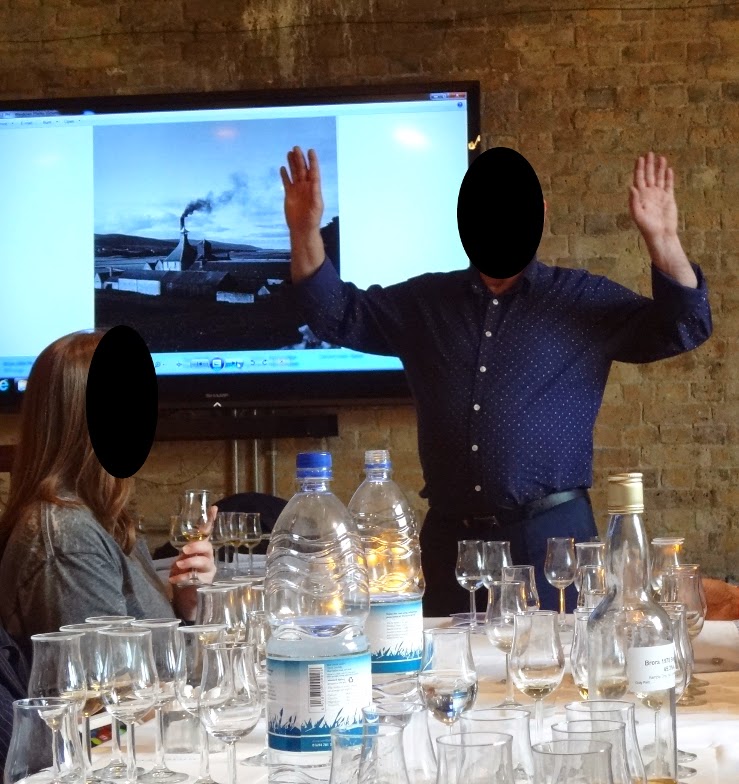 As many have and will over the course of this mad weekend, Colin urges people to not take whisky so seriously and drink it with friends, rather than "invest" in it.
Colin -I once met a guy who had 25 Black Bowmore. I said, 'have you tried it?' He said, 'no.' I said, 'I haven't got one, but I tried it 25 times.'

Despite the fact I read that somewhere else by someone else and reckon Colin nicked the story to make it his own, he is dead right. Hoarding is preventing others access to a source of great enjoyment. It pushes the prices up and goes against what whisky is about: make merry (to quote Dave Broom last year).

Excellent masterclass. Everyone was in a jolly mood, Colin Dunn was in top form and the drams were all enjoyable. The whole thing was too short to take proper notes, of course, and one could argue the interest in taking notes for six drams with such similarities anyway. Great fun, though. Friendly atmosphere and all.