None of that Feis Ile commercial nonsense for the Old Man of Huy. Queueing is for sheeple, as the Swissky Mafia often remind us. And Islay whisky is for connoisseurs who lack imagination.
I was, however, convinced to take part in the other whisky festival. That of the old whisky capital of the world. The remote town, on the southern end of Kintyre, that peninsula that looks like a dick on the left-hand side of Scotland's map (yes, you are now unable to unsee that).

When I say 'remote,' I mean it. From the capital, it is a 12-hour journey, with one train leg and a bus ride that is almost as long. But that is the point. If it were easily accessible, it would lose much of its charm.

JS, MS and I arrive in Campbeltown around 16:10. We check into our accommodation, then head straight for Glen Scotia, which has its open day today. Once there, we meet the Swissky Mafia and MSo. Unfortunately, there is not much to do, other than socialise: Glen Scotia is closing shop. The food stalls, open bar and distillery tours are all winding down; we have missed all the fun.

MS craves a "crusty pub." JS and I change attire and head for today's main event at Springbank distillery.

In the courtyard between Springbank and the late Longrow (now Springbank's bottling plant), we meet EC, BC, CB, BH, DW, DH and M. It is EC's wedding in a couple of days, and it feels as though this is his glorified stag do. A weekend without girls. The gang is cheeky and enthusiastic; we will have fun, tonight.

In between drinks (bubbly and fruit juice) and canapés (smoked salmon on toast, tuna salad on crackers, an unidentified cheese on oatcakes and others), I introduce myself to Mark Watt: he will be at our table, tonight, he tells me.

But what is tonight anyway? It is the grand opening of the festival: a full dinner in the loft above Springbank's bottling hall. Before that, however, we need to choose a dram.

We are all ushered into the bottling plant, where a few casks are waiting for us. We are told what the first is and our glasses are filled straight from the valinch -- if you have not seen one, it is essentially a big, metallic straw, with which to draw a sample from a cask.
I realise a bit late that I forgot the camera. Argh. I will rely on someone else's, but the photographs are out of order, to make up for the lack of them in places. 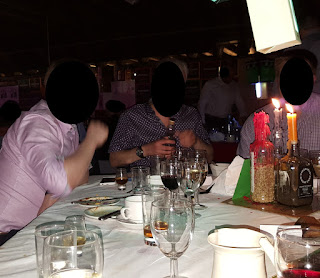 Springbank 17yo (51.2%, Cask Sample, 2nd Fill ex-Oloroso Sherry Hogshead): nose: barley. This smells like a Local Barley. Cold tobacco leaves, and even a touch of ash, later on. Mouth: gherkins in vinegar, smoky barbecue crisps and leather. Finish: long, warming, with vinegar again, as well as a whisper of smoke. 7/10 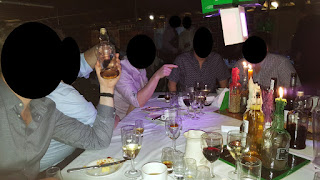 Springbank 15yo (49.2%, Cask Sample, 1st Fill ex-Port Hogshead Finish): this is "only" a finish; the whisky spent most of its maturation time in a Bourbon cask before being re-racked. Nose: pencil shavings, coal dust, but also a waxy touch and syrup. Mouth: sweet and rocky, similar to honey on gravel. The palate is intense, warm like a hot toddy. Finish: it fails to deliver more than barley and ash, here, unfortunately. 6/10

The atmosphere is warming up quickly and the crowd is becoming rather rowdy. We still have one to go, however... 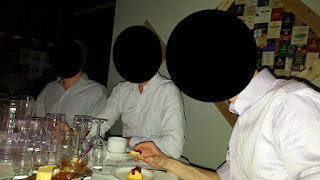 The attendees are requested to vote for their favourite: the third is the clear winner. 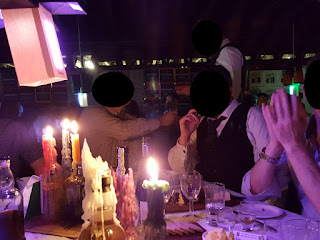 We then proceed to our tables. We share ours with the lads listed above and Mark W. The latter explains that it took place in a warehouse, the previous years and it was really good. Barbecue, candles and alcohol vapours, "but as long as no-one takes a picture, everything's fine!"

After a welcome speech by Findlay Ross, head of production at Springbank, but before they even bring the starters, drinks arrive: a bottle of the aforementioned Springbank 20yo for each table. Hm.

Wine is poured during the meal (white and red), but I do not even look at it, let alone drink it. That bottle of Springbank 20yo keeps us busy. And they bring another one. And when they are both empty, we receive a bottle of the Springbank 15yo Port. And a bottle of Port. I start the rumour that it is the Port from the cask in which the Springbank was matured. And then we have Portsky (the Port and the Springbank Port Finish).

The evening winds down. JS and I decide we need some sleep. After all, it is only the first day.

On the way out, everyone receives a bottle of the Springbank 20yo. It was bottled and labelled during the meal. Wow. 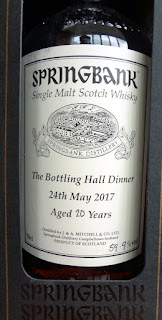 Carry on reading here.
Posted by the Old Man of Huy at 11:36