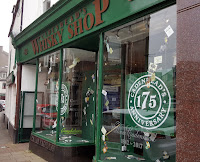 After a night of almost no sleep, a full-Scottish breakfast at Café Bluebell does the usual trick of making me human again. Which is just as well, because after a short stop at Cadenhead's shop, we have a tasting, this morning: the Über-Geek tasting, to be precise.

A bold claim, everyone will agree. Nevertheless, it seems like something that might appeal to all the geeks of the whisky world -- and I will gladly concede I would like to think of myself as one.

It is a short walk to the warehouse where Findlay Ross and Lea Watson await us. There must be 60 people in the attendance, perhaps more. We stick with the lads from last night, who strike up a conversation with MS. BC and I are bracing ourselves for all the geekiness to come. 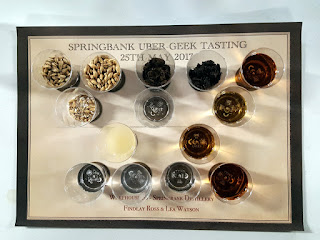 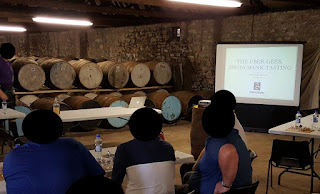 The presentation starts. A couple of "not quite sure about that," "haven't really looked into it" and "let's not go into the details" make me wonder whether there is also an Über-Über-Nerdy-Geek tasting at some point. I am starting to be disappointed. So far, all we have had is the type of barley: two-row Concerto from the east of Scotland, and the peat provenance: Inverness area.
But enough of that. First dram. 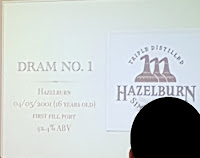 Here, Lea starts talking about the α-Amylase and the β-Amylase, the structure of a protein and how to break it apart. I am impressed. BC will not succumb, blasé that he is. And then this comes up.

Springbank 14yo 2003/2017 (59.5%, Cask Sample, First-Fill Guyana Demerara Rum): nose: holy cow! this is peppery. Milled back pepper and a hint of barley, veiled in a cloak of coal dust. Water tames down the pepper and allows marzipan to come out. Mouth: another beautiful fruitiness, with dried apricots, prunes, sultanas, Corinth raisins and, again, pepper dust. Finish: lukewarm pot ale, augmented with dates and dried figs, pepper. Water keeps it similar, yet it seems to make it even stronger in the finish. 8/10

The yeast is M-strain and comes from Kerry, Ireland.

Longrow 9yo 2007/2017 (58.3%, Cask Sample, First-Fill Sauternes Cask): nose: sweet and mellow, with a hint of barley. Mouth: more mellowness, slightly warmer than expected, yet almost no peat comes through -- strange, considering this is Longrow. Finish: long and comforting, with touches of nail varnish. I like this a lot. 9/10 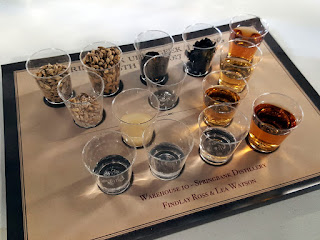 The presentation reaches a conclusion. I consider trying the new make, the feints and the low wines, but decide against it. Despite the warnings at the start f the presentation, I bet some were dare-devil enough to drink them -- not a great idea, probably. I tried the pot ale, the raw barley, malted barley and grist earlier, ignoring the peat. It is rather geeky to have them all there, I find. The hosts kindly offer one more dram for the road:

Auchentoshan 18yo 1999/2017 (52.5%, Cadenhead Cask Ends, Re-Racked 2009 in a Château Lafitte Cask): nose: wine-y and game-y, with hints of earth, then chocolate coulis, which is much more to my taste. Mouth: mellow, with chocolate spread, melted chocolate. Finish: prune, dark chocolate coulis. Not a fan of the nose, at first, but this dram grows on me, the more I taste it.

Time is up. The venue is needed, we are kindly shown the door -- but manage to be the last ones out anyway. :-)